I did four posts on the ACFW conference in Nashville last September but it looks like Mount Hermon’s only going to get three. Hmm. Wonder why? And it was a longer conference too. Actually, that may be the problem. My brain is still leaking out my ears, and I have to turn around and leave for California again tomorrow. At least I’m not driving; Peter is.

I took James Scott Bell’s major morning fiction track with Jeanne, Pam, Mike and Chris. It was eight hours of instruction, much of it based on his book but with added material and examples. One of the cool things he did was give examples from movies. We saw a few clips and the full version of The Fugitive. The good thing about this is many more people have either seen of or heard of a movie than a book. Plus, because it’s generally two hours of a visual medium, it’s a great way to give an example of fiction techniques. He would show a particular clip to illustrate the point he was making about a technique. And then when we watched The Fugitive, we looked more at the structure as a whole.

One of the things our little coterie enjoyed was the addition of a couple of classes related toward a more artistic/literary bent. Andy McGuire of Moody gave a workshop on Christianity and Art that was just excellent. His point was that we need to tell a good story and create good art simply for it’s sake and not feel like we have to be message driven. Yes, our worldview will be evident in our work, but we shouldn’t write with an agenda in mind. Similarly, Denny Boultinghouse, nonfiction editor for Howard Books had a class on how culture impacts our writing. On a side note, Denny is a very funny guy. I had three meals with him just for the fun factor. Also, Nick Harrison of Harvest House talked about literary fiction in the Christian market. Jeanne and Mick Silva did a class called Let Music Rock Your Writing which talked about using musical techniques to inspire and improve your writing.

Dave Long of Bethany House gave a workshop on critiques that was good. He talked about evaluating work using an inverted pyramid. Look at the big picture, major structural things first, then work your way down so that your last edit/critique is a line edit. He also tells a really good story about how he broke his nose, twice. But that wasn’t in the class.

Also, Dave Long and Jeff Gerke (NavPress) did a panel on fiction, and Jeff Gerke talked about how he sees a great potential market in sci-fi and fantasy in the CBA.

Evening general sessions were key noted by Phil Callaway. He’s a phenomenal speaker. Funny and poignant. Very enjoyable. I’m going to order the CDs of the general sessions just to hear him again and share it with Peter. 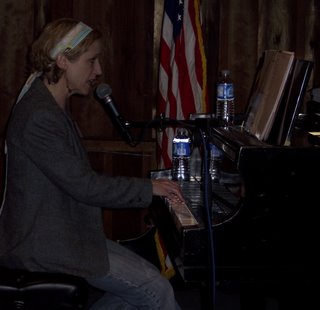 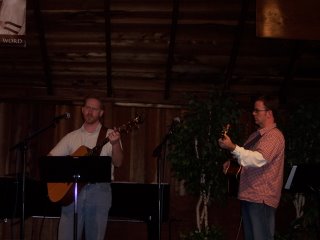 And the worship music was provided by Eustace Scrubb, the band formed by Jeanne, Chris, and Mike. The cool thing about worship music at the conference is that a lot of people in the congregation can sing well and in harmony so much of the time it felt like I was in the middle of a choir. Very cool.

I hung out with Dineen Miller a lot until she threatened to beat me up. Can’t you tell she’s such a scary woman? We had a lot of fun and it was great meeting someone I had only known through the ACFW forums and e-mail and blogs. 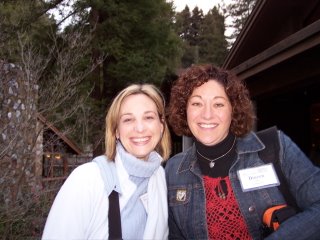 At lunch on Tuesday, the last day after Mike and Jeanne and Chris were gone, I sat with Dineen and met Camy Tang, Marilyn Hilton, and Margaret MacLean in person and saw Meredith Efken again. And rode with Steve Laube on the shuttle to the airport. One of the things we were talking about was how cool it was to measure our own growth as writers each year at the conferences. And how much we benefit hanging out with other writers. We have such a solitary profession that most people don’t get. So when we do get to be in community with other writers, we soak it up like rain in the desert.

For me, one of the highlights was sitting outside during Palm Sunday service. Since I was sitting between Mike and Chris and shivering, they may question that as the highlight. But when I was little, we would often drive up to the mountains as a family and hike around. It always seemed to me that the wind was God moving through the trees. So being outside, particularly in the mountains, is one of the ways I feel closest to God. Even though it was cold, spending Palm Sunday outside, taking Communion under the trees was a way God made His presence known to me in the midst of all the excitement of Mt. Hermon.

Sharing the Mount Hermon experience with people who have become my good friends just took everything to another level. Yes, it would have been a great conference if I had gone not knowing a soul (like I did five years ago). But what a difference to share it with a really cool group of people. Thanks for letting me hang out with all you guys and absorbing some of your coolness.

Anyone ready for Dallas? 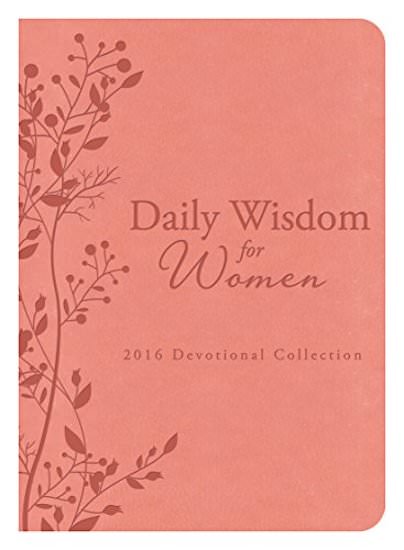