I’m not home yet. I got to my mom’s last night, greeted by my teary-eyed kids at the airport. I missed them so much. Of course this morning, Josh has already thrown up and we have a flight out of here in four hours. Should be fun.

We decided the last day that maybe what happens at Mt. Hermon should stay at Mt. Hermon. Okay, it’s really not as bad as it sounds. We stayed up late a couple of nights telling really bad stories that I can’t even remember and laughing a lot. I haven’t done that in a long time. It’s good for you. And, obviously, I did a good job as a body guard. Nobody died. Well, at least not on my blog. According to Brandilyn Collins mayhem was afoot. Mike was even implicated in the scheme. However, the best news is . . . no one got to see my one-armed cartwheel.

Monday night we got kicked out of one of the buildings at 11:30 by the security guards. The previous night we closed down the soda shop at 11 then stood around outside for another half hour or so talking. Nothing deep. Really. Most of it was incredibly inane. But it was a ton of fun. Before we went to the soda shop, we had tried to play basketball. We walked all the way down to the gym to find it locked. The workout area was open, and it was gorgeous, but we couldn’t get into the courts. Then Mike found the women’s room was open and tried to get in that way. I wish I had taken a picture. Mike and Chris and Chris were all standing in the doorway of the women’s bathroom. I think that would have made good blackmail. Why no one asked me to go in to check I don’t know. It must have been because they were protecting me. Right? Yeah, I write fiction.

The phrase “grandma’s house” will from this time forth have a new meaning. Mike and Chris stayed in one of the cabins and they called it grandma’s house because that is exactly the aura this place had. I finally got to see it on the last day. Mike and Chris really needed someone to look out for them. They both forgot essential items like toiletries and clothing items.

Speaking of which, it rained off and on during the conference. I was pretty cold the first day or two then seemed to adapt. But the last day it just poured, and I had to haul my luggage down two flights of stairs, then up another out in the rain then down hill. I found out everything, including my computer bag, was waterproof, but I was soaked from the knees down. When I got to my mom’s house last night I realized it wasn’t exactly waterproof. A couple of books were nearly ruined and everything was quite damp.

Our room wasn’t grandma’s house. I forgot to take a picture of our room. We had the triple deluxe, which was pretty nice, like a hotel room. It had three beds, two twins and a double, which Jeanne and Pam left for me. Aren’t they sweet? The beds were comfortable, the shower hot and the temperature good. We had a nice balcony that only got used when Pam stepped outside to spray her hair. It had a great view but it was just too cold or too wet to sit out there. 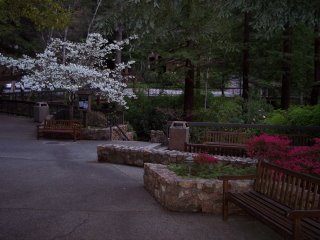 This is the central area. I wish I had more time to explore the grounds. They are beautiful with streams running through redwood forests and plenty of hiking trails. It was just too cold or too rainy to do much exploring. However, they do a family camp in July which I’m thinking might just be the ticket.

A few people blogged from the conference. Brandilyn, Dave Long, Chris Mikesell. Check out their stuff. Chris has pictures of us. Good pictures too.

Mt. Hermon is a long conference. I think we were all at our limit by the last day, especially since we were getting less than six hours of sleep a night. But the connections and the learning and the friendships are just invaluable. Next year’s conference will be March 30 to April 3. I’m already saving my pennies.

Tomorrow, I’ll talk more about the actual classes I took. If we survive the trip home.