I was supposed to post about this book on the 15th and somehow overlooked/forgot it! Which is a shame because it’s a rather surprising little book. It looks like a gift book but it talks about a powerful message. In fact, I think the small packaging makes it easier to take the message in small bites and ruminate on it.

A good example is the subtitle: a rose planted in the desert of our hearts. It sounds a little cheesy but if you think about it, God’s love is amazing, unnatural to us humans as a rose in the desert, and incredibly transforming. This is definitely a little book worth picking up.

It’s the 15th, time for the Non~FIRST blog tour!(Non~FIRST will be merging with FIRST Wild Card Tours on January 1, 2009…if interested in joining, click HERE!)

The feature author is:
Stephen G. Post
and his book:
Godly Love: A Rose Planted in the Desert of our Hearts

Stephen G. Post has spent a lifetime studying love in its theological, scientific, and practical dimensions. He is president of the Institute for Research on Unlimited Love (IRUL) and professor of bioethics and family medicine in the School of Medicine, Case Western Reserve University. Dr. Post has published one hundred thirty articles in peerreviewed journals and has written or edited fifteen scholarly books on subjects relating to the dynamic of love in our lives. His most recent book is Why Good Things Happen to Good People, coauthored with Jill Neimark. Dr. Post has chaired nine national conferences in his field and has received the Distinguished Service Award from the National Board of the Alzheimers Association. He lives in Shaker Heights, Ohio, with his wife, Mitsuko, and their two children, Emma and Andrew. 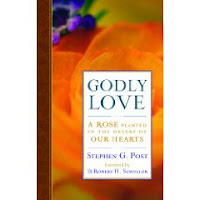 In March 2007 I had the honor of spending several days north of Paris with the great Jean Vanier, then in his early eighties. Jean had founded L’Arche (“The Ark”) some four decades earlier, when he was inspired by an experience of Godly love to invite two men with cognitive developmental disabilities into his home. Over the years, L’Arche homes have flourished worldwide as volunteers dwell with the disabled in communities of faith, prayer, and Godly love. I had attended meals in L’Arche homes in Cleveland on a number of occasions, and I had heard the grace said before eating, the hymns sung, and the energy of love that was palpable in the lives of those caregivers and in the experience of those they cared for and lived with.

Jean struck me as one of the most loving, Godly, and humble men I had ever met. He spoke quietly and brilliantly, and he exuded an infectious sense of fun. On one Sunday evening there was a Catholic Mass in an old renovated chapel from the fourteenth century. About one hundred people had gathered there, mostly L’Arche volunteers and people with disabilities. I saw a volunteer wheel one older man named David up to the priest for communion. That night, at dinner, I asked Jean what he thought David had gotten from receiving communion, for David was probably the most severely disabled and agitated person I had encountered there. Jean said, “Whenever David receives communion, he becomes more peaceful, and that is the power of God’s love. Remember, Stephen, we do not know much about the mystery of God’s love and presence.” Jean’s pure, enduring, and expansive love clearly encompassed such a severely disabled man, and counted him among God’s blessed.

When I encounter a man like Jean Vanier, I feel that we must all stop thinking of God as the epitome of awesome power and strength in the conventional sense. This convention may be partly true, but we need to set it aside; otherwise, we begin to think of God primarily in terms of might, and human arrogance propels us into thinking that because my God is stronger than your God, violence is justified in God’s name. If we think about God in terms of power, then religions become tainted with human arrogance. Far too many prayerful people are carrying rifles in the spirit of pure hatred and pretending that their hatred is somehow divinely sanctioned. This amounts to shallow religiosity, which only causes pain and undermines Godly love. The Lord of power and might is first and foremost the author and giver of all good things, the Divine Entity who nourishes us in love and brings forth from us good works.

We need to stop thinking that our definitions of God are finite and that our knowledge of God’s will is total. Our definitions, even if divinely inspired, are still products of the human mind, and we can never fully understand the Divine. Religious doctrines, if adhered to arrogantly, tend to separate us from one another and shatter the unifying spirit of Godly love that all spirituality seeks to cultivate. When religions place doctrine and force above love, they foment massive evil—from torture to terror, from coercion to conflict. Religious wars exemplify human tribalism and arrogance, both of which bring out the worst in us.

Hatred, hostility, and revenge are such strong emotions that they can crush our fragile sense of Godly love. The pseudospirituality of hatred runs counter to all genuine spirituality, which is always an adventure in love, an expression of love’s deepest desires.

The love of power can sometimes overwhelm the power of love, so we must remain humble and guard against this. No matter how little we know about God, we can still experience Godly love. Only by taking Godly love much more seriously than we do now—even inculcating a profound love for one another among ancient, sworn enemies—can we expect to head off a spiral of widespread destruction.

Most of religion and spirituality is rooted in healing emotions, grounded in love. We will never achieve sustained peace in the twenty-first century unless all religions live up to those intrinsic ideals of Godly love, applying those ideals to all of humankind without exception.

The world shows no signs of becoming any less religious; we as humans will always have a passion for Ultimate Truth that provides safe haven and emotional security in times of distress. Yet we will only have a human future if we infuse universal Godly love into the rituals that religions create, and express through our actions spiritual emotions such as forgiveness and compassion. If our religions fail to promote universal Godly love, violence will sweep us all away in a cataclysmic firestorm.

Godly love alone can realign the world in harmony and peace. Too many kill in God’s name, claiming that they alone know the destiny God intends for humankind. Our limited human knowledge of any divinely inspired destiny to be played out on the human stage belies this specious—and dangerous—claim.

Love is the source of our greatest happiness and security; therefore love is the Ultimate Good, the Supreme Good. Nothing else comes close, for love underlies the creative energy that propels us from birth to death. The withholding of love drives to destruction those deprived of love’s nurturing, its compassion, and its life-giving blessings. This occurs most notably in critical developmental periods during childhood. And it holds just as true for a child in a nursery as it does for an older adult in a hospice.

Our religions, which offer models of righteous living, must put into practice their visions of Godly love, or they risk becoming sidelined, or, worse, irrelevant.