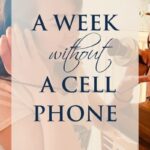 Monday morning I woke up and went through my usual routine. I put my phone at my desk, went to get some tea, and came back and sat at my desk. I touched my phone to wake it up. 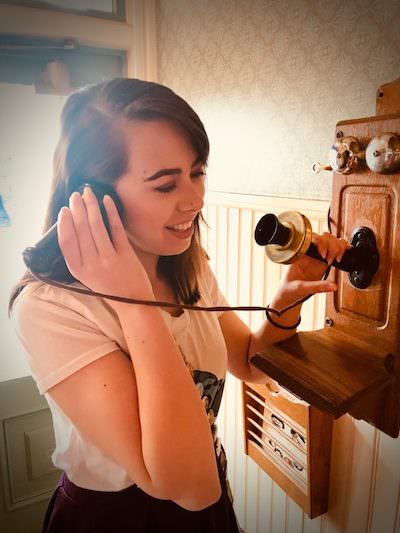 My daughter on a party line at Disneyland

It didn’t wake up.

I hit the button again and again. I’m starting to feel that weird, what-is-going-on feeling. Maybe somehow it really didn’t recharge last night. I plugged it into another charger.

And wait. Fifteen minutes later I repeat all the steps and nothing happens. Surely at least the low battery icon would have shown up. I’ve never had this happen before. Sigh.

I finally find a guy who runs a shop out of his house. I’m a little worried but the Yelp reviews are great and I’m desperate. My other option is a one-hour drive to the Apple store. Luckily, we have a landline that runs through our cable company because we have lousy cell service at the house. No one ever calls on that line except telemarketers so we never answer it. I don’t even know the number.

I call and get his voicemail. And like an idiot, I leave him my cell phone number out of habit.

It takes me a few minutes to realize what I did. Just as I think I should go find the landline number, it rings. I look at the number. It’s the guy I just called. I answer. He says, “Hi, you just called me?” So glad he just hit redial instead of listening to his voicemail.

I explain the situation and he asks if I can come right over. Of course. What else can I do until I get this resolved? I print out a Google Map and head out. I arrive at his house, and he takes my phone to examine it. When he comes back, it’s not with good news. He shows me the guts of my phone and points to the problem. A chip that had a catastrophic failure and took some others out with it. It’s not repairable. Major sigh.

He buys my phone for parts and gives me some ideas of how to find a good used phone. He even offers to check them out for me. I head home in the silence since I can’t play podcasts like I usually do. Instead, I look at the scenery, wishing for my camera. I’m grateful that I have all Apple products and that my phone constantly backs up to my computer. I have no data loss.

But how do you survive a week without a cell phone?

I decide to pick up lunch and reach for my phone to text my son to ask him what he wants. Except I can’t. So I get what he always gets. He’s a teenager. He’ll eat whatever I bring him.

When I get home, I deposit the food on the table and head upstairs to the computer, my only technological lifeline. How can I even tell people I don’t have a phone if I don’t have a phone? I put a message on my Facebook page, for whoever will see it. People could Facebook Messenger me. But not everyone will see that. Probably not even most people.

I can text people with iPhones via my iPad. So that means I can contact my folks. A good thing or they would worry.

And since I have Google Voice, I get an email if someone calls and leaves a message. So there’s that.

I find my exact same phone on eBay for $150 less than I paid last year for it. It’ll be here in five days with a rush delivery charge.

All right. I can do this. Somehow, this will all work out. I’m looking forward to the challenge.

But I find myself reaching for my phone anyway. I need a calculator, an alarm clock, my reminder to stand at my desk. All of which are on my phone. Not to mention my camera, my GPS, my podcasts.

I had planned to text a group of friends to see about dinner this weekend. But I don’t know who has iPhones and who doesn’t. And I probably don’t have their emails because who emails when you can text? And if I call on the house phone, they won’t recognize the number and won’t pick up. So I give up on the dinner plans.

For the most part, I think I’ve got it handled. I Facetimed with a friend I normally call. She’s got an iPhone so we could arrange it via text. I let my parents know what was going on so they didn’t think I was dead when I didn’t answer the phone. And I was grateful for Google Voice that let me know the guy who was coming to look at my leaky windows was waiting to hear from me. Luckily, he picked up when I called from the landline.

But the next day I ran into a snag. I hadn’t clarified with my daughter if she was picking up my son after school. As it got closer to that time and she didn’t come home, I tried to call her from the landline. I left her a voicemail but I was dubious if she’d even listen given she didn’t recognize the number.

She did try to call me—she hadn’t see the call I made. And I saw it come through Google Voice on my email. This time when I called her, she did pick up but she wasn’t planning on picking up her brother, so she had to backtrack. But if she hadn’t picked up, I would have had to go get him, not sure if she would be there or not. No way to communicate with anyone.

I also had planned to make a drive to go to a friend’s book signing, but it was at night and over two hours away. I couldn’t find anyone to go with me. If something happened, I had no cell phone and no way to even call AAA. Pay phones no longer exist. I decided to stay home.

I also realized that I know no one’s number. I wrote down key phone numbers and put them in my wallet.

But there are many things I do each day, like check my bank account balance. I realized I couldn’t order an Uber or send money via Zelle. I got locked out of Instagram on my computer because I couldn’t enter a two-factor identification code that was sent to my phone.

My hairdresser doesn’t take cards. She takes cash, or I pay her via Zelle on my phone. Which I realized the night before I went to see her. Time to hit the ATM.

While I don’t like being always reachable on my phone, society has changed. People expect you to be reachable. Apps are designed to be used with a phone. The technology ship has sailed and there is no going back to the way things were.

When my phone finally came, I was up and running pretty quickly. I did have to find all the passwords for my apps and get those entered in, but there was no data loss. But now, I’m reachable and have no excuse 🙂